It would appear that I am a glutton for punishment. Not content to have one contest going on in my life these days I figure I would go and enter another.

Not that I don't enjoy those sort of contests.

No, this one is a little different. A mate of mine, one of the few that also tinkers with doing art on a computer using the various packages out there, stumbled across a competition being held by Adobe that had the strangest brief of all time. The instructions were simply "Five". That was it, end of. There is some method to the madness though, as Adobe is releasing the new version of their product suites which has the title of CS5.

So while she had entered she figured that I might as well throw my hat into the ring. Go check out her work and register and throw some votes her way. I am not entirely sure if it is a popularity contest or not but a few votes for such funky work can't hurt right. Her skills with Illustrator and Photoshop sort of put me to shame.

While over there why not vote for mine as well.

For those two lazy to go and click the links (you lazy bastards) I've uploaded my entry below. 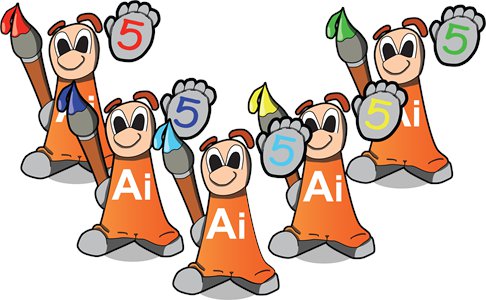 
My digital art is a mix of old and new. I draw everything in a sketchpad first, using good old pencil and paper, then scan the image into a computer. Afterwards I digitally ink it using either Photoshop or Illustrator and my graphics tablet. Reason for doing this? Well I used to ink things by hand, but found that after I scanned in a inked image it had a truck load of clean up work to be done.

After reading some art blogs I saw a number of ways around this issue. One was to scan the image in a higher DPI than I was using, but that meant bigger files and who wants that. So I figured since some cleanup work was required regardless of scanning detail inking it digitally on the computer was the better option. Faster too.

Plus it means I get to keep my pencil image unmarred by ink. I was never an ink artist, I am a pencil artist. It always felt like I was destroying my art when I inked over it to get it to scan better.

Anyway, that's all on that topic. In comedy news for anybody floating around Dublin city tomorrow night come on to The Belevedere on Great Denmark Street and cast a vote for The Jester to get through to the Final.

You know it makes sense