Did some work on the comic images the other day, long overdue I might add. I had them scanned in and on the system for days but it was just a matter of getting time to work on them. You'll find changing jobs gives you a bit of free time to work on projects that have been gathering dust

The "inking" process didn't take as long as I figured it would. I had all the panels and parts done in roughly three hours. Although that is including a day's break in between working on the images. But still three hours isn't bad going.

Ever since I figured out how to use the pen tool correctly in Illustrator the "inking" of pencil images has gotten much faster. Plus I love the freedom the digital "inking" process gives me. Tiny adjustments, minor mistakes, all quickly fixed without the need for more "cleanup" on the computer afterwards. Not that I will stop inking images by hand with a good old felt tip, it's just I have more options open now.

I should have scanned pencil images in years ago. It is a much faster method of doing things.

Sadly I don't think I will have the comic finished before I go away on holidays. Did I forget to mention that I am going away to Spain for a week with the lady friend

. Sure my vampire nature skin might burst into flames from the sun, but that is part and parcel with going on holidays right?

I will try and get the colouring done at least before we jet off tomorrow (but no promises), leaving only the words to be added in. Sure I have all the words ready, they just need the speech bubbles around them. Half an hours work tops. The drawing has to be the hard part of making a comic.

I did some painting over the last few days as well. 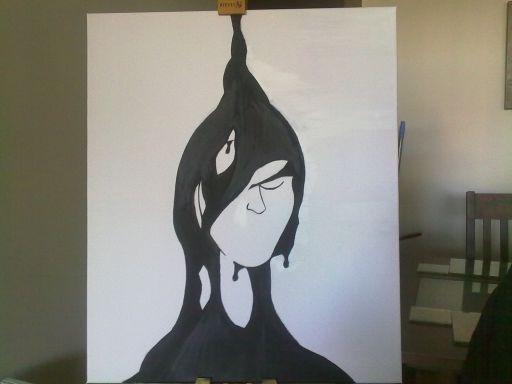 Oddly enough it isn't finished yet


Believe it or not this isn't finished. Since I wanted to not risk ruining the image I pencil outlined my work onto the canvas. Sadly pencil doesn't rub off canvas all that easy so I need to go over the white of the canvas with white paint. Ah well. That's the problem with being so used to working on things on the computer, it sort of makes you forget that in the real world you can't just hit the "undo" button and fix up minor things with a click of the mouse.

This piece has been getting a lot of interest from folks though. One of the lady friend's friends even said that I should do a whole load of paintings in the same style. Not a bad idea, one I have been playing with in my head already. We shall see what happens. First things first, I need to finish/fix up this one.

Plus get the comic posted

Speaking of posted, I sent off my submission chapters to an agent in London yesterday. Now we play the waiting game. Most agencies seem to get back between four and twelve weeks, so it could be a long wait.

That's pretty much that, did I mention that I am away to Spain tomorrow

This is something to be worked on in the future. In the mean-time, don't get burnt to a crisp in sunny Spain and have a generally good time!!

Oh have no fear, I have packed my Outdoor Paint to use against the elements, mainly sun