It's taken a long time to get to this stage. Mainly because of work, comedy, writing. Half a dozen things really. But I finally managed to finish the first, maybe only, comic for the site.

I have about six ideas for another six comics, but there are a few things to consider. The main one being how folks respond/react to this one. If they like it and want to see more than I'll try to pump some more out. If not then I will draw a line under the project and call it a day. After all it is only a little play-hobby that I had. Not some huge money spinning idea that I am relying on.

I don't want to say something silly like I plan on releasing a comic every week/month either. I follow a few webcomics online and the amount of abuse those guys get when they just about miss a date is insane. One of the pages that I regularly visit is done by a full time comicbook artist. The style and story are fantastic, but the odd time he misses deadlines with the site due to work stuff. Given how hectic life can get with comedy and writing and work I don't want to fall into a similar trap.

One idea I might try is to have a series schedule. During the months of Summer, for example, release a load of comics. That way I can work on them during the year. Again though, that all depends on how people like/dislike this one. Not to mention how much work each one takes, if I change the style, blah blah blah.

But, to avoid any more delays, I present to you, the first ever Bauble Comic: 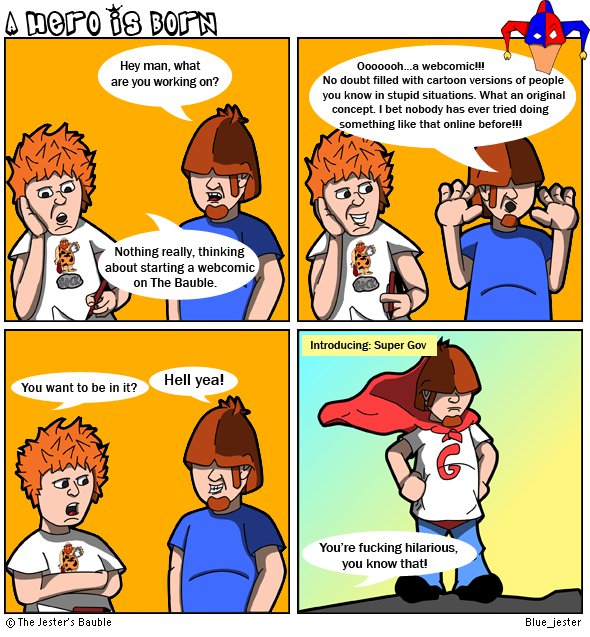