Places Not To See

I am just back from a Hadoop Management course over in England. There are some projects coming online in the next few months that will have Hadoop Clusters in them, so having a guy on the team that can use and understand Hadoop makes sense.

Sadly this course was in a little place outside of London called Slough.

I mean honestly. Sitting a mere forty minutes from London city centre by train it may as well be a different country. There is literally nothing in the place aside from offices and "housing". In fact the training was held in the company offices in Slough. Not one single person in the office actually lives in Slough, they all drive or commute to the office. Living in Slough is apparently a Hell they just won't volunteer for. One guy I talked to at lunch said it just wasn't an option, even if it meant an extra hour and a half sleep in the mornings.

When you have to pick between a long ass commute or an extra hour of sleep and you pick the commute you know full well that it doesn't speak volumes for Slough.

The "housing" aspect of it is strange as well. It's like several ghettos from different countries all had the same stupid idea to set up shop in Slough. They are run down, not cared for, grey and miserable buildings. Some of them have clearly been hit by the recession in a physical manner as they are not complete at all or major need of repair. Or maybe just demolishing.

It was such a depressing town that when we pulled up to the hotel the taxi man pointed at a building beside it and said "That's the train station into London."

First time in Slough and even the locals are telling us to go into London.

The one and only tourist attraction of Slough is a stuffed dog in the train station. 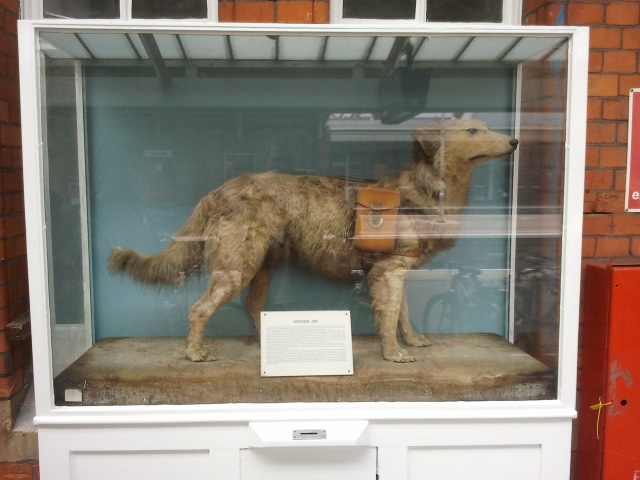 
Says it all really doesn't it.

Our first night there three of our party of four went exploring for somewhere to eat. Aside from the few skin heads that we say and the one fast food joint that was open there wasn't a lot on offer. No pubs. No clubs. No shops. Nothing. The place was a bloody ghost down. Actually it was closer to a zombie apocalyptic town as we did encounter a large number of homeless people just ambling about the streets in the pissing rain moaning for 'change'.

Our second night didn't go much better. We ate early and found the only "Irish" pub in the place. A pub that was deader than a graveyard and literally kicked us out at half ten. Kicked us out into the buzzing metropolis that is Slough on a Monday night.

The only difference between Slough on a Sunday night and Slough on a Monday night is the day has a different name. It doesn't look much prettier than that.

So yea, overall, not a trip I will be making voluntarily again. Hell I think if another training course comes up and it is in Slough and I have to go I may just quit my job. Slough isn't a place you want to see twice, even once is too many.

I've never actually had the Slough experience, but, like I said before you came over, I've heard ample enough to avoid it.